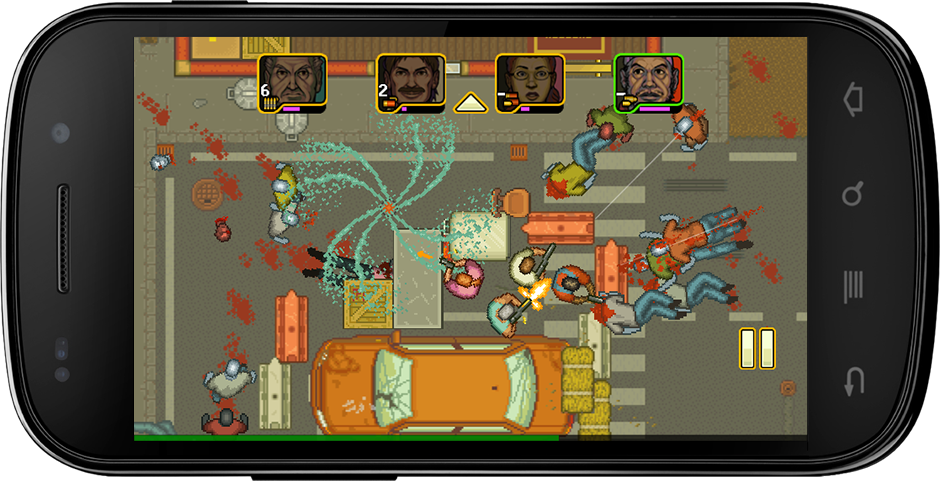 Four friends meeting at the usual bar, the TV suddenly starts shedding news about a mysterious widespread of undying rioters; before even grasping the situation, some of these “rioters” are facing the street. There is just enough time to outline a defensive strategy, choosing the best sheltered spot and pushing the furniture around to barricade it. When the mindless rabble arrives, the only option is fighting.

..and now Crafting too!.

This phase basically consist on setting up barricades and laying down traps. Once you are done with it, you can start the Active phase.

On a map there are several moveable furniture you can move around to block paths, thus creating barricades that keep the characters out of the zombies reach. But you can also use them to create dams to maximize the effect of some traps: for example if you put a barricade before a landmine you’ll have a lot of zombies stepping on that mine when the barricade falls.

You have up to 8 placeable traps at your disposal, from simple killing devices like landmines, to crowd control tools like barbed wire.

During this phase the zombie horde will arrive, hungrily trying to swarm on your guys. Fighting occurs through three means:

Of course the plainest way to fight zombies is to shot them. Pistols (secondary weapons) have infinite ammo but they’re weak, so when the situation becomes crowded, you need to switch to Primary weapons, which are way more powerful but do run out of ammo. Weapons have different statistics and operation, making them useful in different ways; roughly you have:

Shotguns: useful when zombies start to amass on the barricades, because they can hit multiple targets at the same time.

Automatic: all purpose weapons, they however run out of rounds very fast.

Sniper: “one shot, one kill “weapons with slow rate of fire, useful for lowering the incoming zombies amount or to quickly take out special treaths.

Useful for clearing group of zombies. You never run out of them but you have to wait before throwing another one.

Zombies will tear down barricades when they stumble them. However you can repair them to keep them up.

Survive the waves and earn money, spend the money to buy traps and barricades.

Offers a more lively Active phase, with you having to run around to pick up the traps and the weapons that randomly pop up in the map.